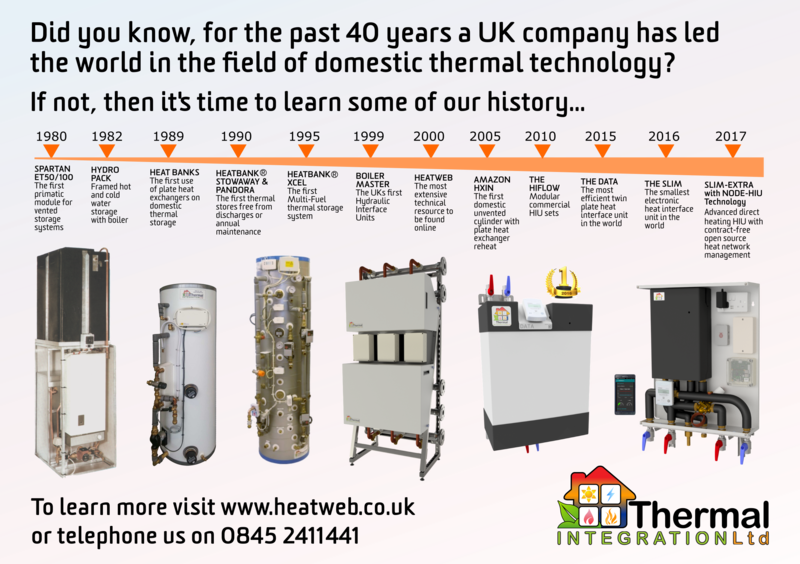 At Thermal Integration we design and manufacture pre-fabricated hot water and central heating cylinders, thermal stores and heat interface units to suit almost any domestic or light commercial application. Our range of products is the end result of decades of continuous development and improvement in heating technology.

We hold to the philosophy that all customers deserve our best level of service for the life of the product, as well as complete honesty throughout the product selection process. We hold a significant number of patents in the fields of water storage, heat exchange, and the networking of communal heating systems, and continue to push the boundaries.

To fully understand our history, it is worth describing where Thermal Integration came from. Thermal Integration was born in 2011 when Dedicated Pressure Systems Limited (DPS) went into administration and Specflue purchased them. The new owners carried forward the intellectual property, products, factory, methods and key technical staff from DPS, and so the history and achievements of DPS are also described here.

DPS itself was formed in the late 80s as a family run consultancy. The founder, George Hanson-Graville, had previously run copper cylinder manufacturing businesses, including Utterly Ingham Copper Cylinders Ltd., and Hydro Spartan Ltd. Hydro Spartan had been responsible for key advances in early coil type thermal store technology, combination plumbing packs, primatic cylinders, the Spartan ET50 and ET100 (used extensively across the UK in local authority properties), and the GR1 valve (a replacement for the ball float valve that was demonstrated on Tomorrow's World).

DPS was formed from the idea of using a plate heat exchanger instead of a coil to generate domestic hot water, and the HEATBANK® Thermal Store was born, closely followed by the Stowaway HEATBANK®, a manually filled thermal store requiring no discharge pipe. Both products won early success with Lambeth Council, where the units were fitted across the Old Thorlands Estate, as well as others, with manufacturing sub-contracted, and were supplied as fully pre-fabricated systems with all central heating controls factory fitted and wired.

In 1994 the business went into partnership with Johnson and Starley Ltd. who became the sole distributors of the product. With DPS focused full time on design and service, the range rapidly expanded to include heat sources of all kinds, from simple electric systems through to wood burners, boilers, district heating, and early heat pumps. Special interest was placed in the advance of storage layout and controls to best combine heat sources of differing temperatures, while working with loads also of differing temperatures. The technology advanced to the point where we were invited by the then Institute of Plumbing to author the sections on Plate Heat Exchange and Thermal Storage in the Plumbing Engineering Services Design Guide, as well as numerous technical editorials in the Plumbing Magazine. HEATBANK®, to this day, represent the pinnacle of thermal store design.

Early designs for HIUs (Heat/Hydraulic Interface Units) were also launched, with small numbers designed for custom contracts. At the time, there was little call for instantaneous HIUs, as local authorities using district heating networks relied more on local water storage to provide electric backup and resilience to the system.

The Growth of DPS as a Consultancy

Over the 1990s, tens of thousands of HEATBANKS® were installed across the UK, although mostly in the South East, with customers including:

The companies patents had now grown to include:

1998 saw the birth of heatweb.com, the company website. This has since been a centre of focus for the business, and has always carried a wealth of technical information as well as software designed to make the specification of thermal stores and plate heat exchange systems as simple as possible. It played a large part in the way the company formed its methods of handling enquiries, with the aim being to collect data via an online design process, as well as provide a permanent online record (the early designs are still maintained) to customers of supplied systems.

We now operate a number of web sites, as follows:

In 2003, the sub-contract manufacturers went into administration, and DPS were forced to rapidly establish a manufacturing plant of their own, initially based in Epsom, Surrey. This was followed fairly soon afterwards by the end of the Johnson & Starkey sole distributorship, and with everything from design, through to manufacture, specification sales, and service, all under one roof, the product range continued to grow.

With the web site software flourishing, and the age of embedded electronics arriving, DPS began to research the use of electronics for extracting data from sensors fitted to installed systems. The growing use of heat pumps was a driving factor, with us being asked to design and supply bespoke thermal stores combining heat pumps with other heat sources. Given that the efficiencies of heat pumps are significantly affected by the temperatures at which they operate, combining them with solar panels, a wood burner, backup immersion heaters, underfloor heating and radiators, in such a way that the heat pump efficiencies could be maximised, introduced a few challenges and ongoing operating data proved very useful in fine tuning the storage layouts and use of baffles. Software and electronics were developed in house, using development platforms such as the Basic Stamp and then the Arduino.

Until 2011, DPS continued to supply both bespoke and volume HEATBANKS®, as well as a growing range of pre-fabricated systems. Achievements include:

By the time DPS ran into problems, and finally went into administration in 2011, they had started to supply Specflue Ltd. (the UKs largest flue distributor) with HEATBANKS® for customers of theirs that wanted to use wood burners for both domestic hot water and heating. The HEATBANKS® had long been a favorite of many of the wood burner manufacturers, due to the extra care an attention put into the design process - wood burner installations are possibly the most difficult and potentially dangerous of all fuel sources. DPS had always been very thorough in making sure the installers knew how to install systems safely. Specflue, who had the UKs first HETAS approved biomass training centre, were branching out into renewables, as a good deal of their flues went onto wood burners. The use of HEATBANK® technology allowed them to move into the sale of many heat technologies other than flue, that feed into the HEATBANK®, so it was in their interest to carry the business forwards under their ownership, and obtain the expertise in successfully delivering integrated multi-fuel systems.

We had also undergone a Retrofit for Future scheme in partnership, utilising a HEATBANKS® with wood burner, solar panels, gas boiler and remote monitoring, and specification sales were in the pipeline, including the next phases of Oxford Brooke's University, and 352 systems for Queensland Road in Islington, both with Pandora HEATBANKS® on a district network.

The name Thermal Integration was chosen as it best describes what we do, and the factory soon relocated to the Specflue site in Sudbury, Suffolk, where production continued.

A design office in Raynes Park, in London, was also opened, and also acts as a renewables and district heating showroom.

Specflues values of customer service, efficiency and good management have combined well with the technical resources and methods in Thermal Integration, making both businesses stronger. Further talent has been recruited, including technical sales managers and exceptional designers, with more than 40 years combined experience in the heating industry, and this has helped bring in new ideas and the latest 3D modelling software and design methods.

Specflue operate the largest renewables and HETAS training centre in the UK, across the road from the Thermal Integration factory. They have taken on distributorship of the MCZ range of pellet boilers, and with solar thermal panels also in the range,have become one of the UKs largest suppliers of domestic biomass systems. The training centre has been able to reflect the very latest technologies both in the renewables industry, and in how to integrate them. Within the Thermal Integration factory we also have, alongside production, a comprehensive research and development facility, that also doubles as a district heating training rig. This offers the most comprehensive training facility, we believe, in the world on renewable domestic hot water and heating systems and district heating.

These services have enabled the businesses to establish a national network of independent and exceptionally well trained engineers, able to carry out any service or commissioning requirements that should arise.

Although thermal store technology has steadily marched on, the most significant technical developments in the past four years have been in the HIU arena, and most notably in regards to intelligent control. We have made some key advances, both in heat exchanger layout, in valve selection, and in networking that have allowed us to offer the following:

The current Product Literature Page on this Wiki site says a lot more.

Numerous sites are now installed using Thermal Integration HIUs, with some acting as testbeds for the latest networking technology.

One interesting example, we are now in the process of handing over a site in Putney that makes use of centralised modular HIUs to generate DHW, radiators, underfloor heating, and a commercial zone, making use of two heat sources, high and low grade, used in partnership to maximise efficiency. The system has extract air heat pumps, CHP and gas boilers, as well as full connectivity via our units to the internet. The heat exchange modules work amongst themselves in groups to work out how many need to come online, rotating their load, and communicating any issues to both the sites with a more traditional BMS platform, and to our servers. A full description can be found here.